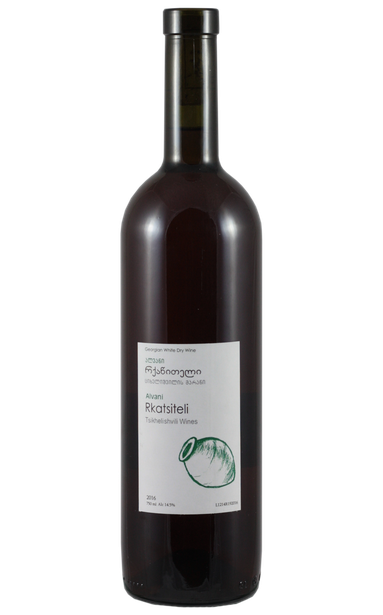 Our most mature variant among the Rkatsiteli Amber wines. Alone its colour can give you an eyeful of sight. And also, the palate wants to be pampered: Sherry, cedar and quince are in the air and fill the mouth with a golden feeling of perfection of form. With every sip you notice the years of experience and mastery of the winemaker and you involuntarily imagine the dedication, unconditionality and vision with which this wine was created.

Aleksi Tsikhelishvili learned the craft of winemaking already in the early years from his mother. In the Soviet era, away from mass production there were no other possibilities to run a business with wine. So he constantly developed and refined his art of wine-making in the "shaddows" until in 2009 he finally brought his first commercial vintage on the market outside the borders of Kakheti. Mastery takes time, just like a good wine itself. The times of his experiments are over now, his wines have an incredible body depth and a perfect balance. At almost 60, he is probably the most experienced natural wine-maker in Georgia. And one can taste this with each sip of his wines from the varietal grapes Rkatsiteli, Mtsvane and Jgia. When asked what general scent and aromas features a grape has, I recommend taking a deep nose of Aleksi's wines/put your nose into Aleksi's wines and inhale. At first glance, Aleksi seems reserved, but shortly thereafter, one notices his balanced, deep power, and the perfection of his work makes it possible to recognize his artistic heart: This is best evidenced by his relationship to his Jgia wine. It is the story of a long search and a finally recognized spiritual kinship: Aleksi re-discovers Jgia, a grape forgotten for many decades, and creates from it a rust-colored red wine, that doesn't fit into any category - like him. In the village Alvani, on the left bank of the Alazani River in north-western Kakheti, Aleksi cultivates mainly Rkatsiteli and Mtsvane on 2.5 hectares and some Jgia. His production is about 4,000 bottles per year, of which about 200 are Jgia. The soil, which he orders biodynamically, is a mixture of sand and clay. In order to keep the soil moisture in the hottest summer period, Aleksi does not cut the grass between the vines, a decision that says a lot about his wine.