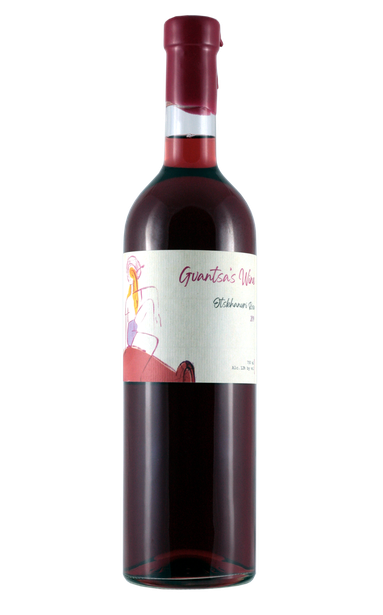 Earthen summer dream
A vineyard selection of Otskhanuri Sapere made by the young woman winemaker Gvantsa Abuladze. This rare and difficult to say variety is sourced from their estate in the village of Obcha. All red varietals grown in Imereti are higher acid, lower sugar grapes due to the humidity of the region. Insane dark color, notes of pomegranate, sour cherry, this wine has crazy cool crispness, medium-plus body, super dry with firm fresh tannin on the finish.

The vineyards on the five-hectare family farm are a tangle of weeds, wild flowers and spreading vines. Bees buzz and ants scurry between the vines. In the village of Obcha, located in the west of Georgia, Baia Abuladze cultivates wine in fourth generation. Baia, with 27 years one of the youngest winemakers in Georgia, started making her first own wine five years ago, together with her two siblings. Her sister Gvantsa (26) has meanwhile also created her first wines and her brother Giorgi (21) is studying oenology. Although she can draw on a lot of family knowledge and tradition, she is the first to bottle and market her wine professionally. She is thus part of a new development in the Georgian winemaking world, in which an increasing number of young female winemakers are continuing and expanding the craft of their previous generation. Since Baia also appears in the media and opens new target groups, she was listed by Forbes in the Art&Culture 30 Under 30 list at the beginning of 2019.

We meet her at her winery, expecting a young entrepreneur with some need of admiration, but simply encounter an unexpectedly cheerful, natural and down-to-earth winemaker who is simply proud of her rural roots: "I follow the old traditional methods and rules. They knew what had to be done and how important the land is. We have no special equipment or other processes like stabilisation by adding chemicals to the soil," says Baia, whose grandfather taught her how to prune vines properly and pick grapes according to the lunar cycle, a practice that is once again common among modern biodynamic winegrowers.

In Baia's self-image, nature itself should be allowed to do most of the work, working with it and not against it. For example, she fertilizes only with manure and grape skins and the irrigation of the vineyard is done only with collected rainwater. Baia Abuladze cultivates the four autochthonous varieties of Imereti, Tsitska, Tsolikouri, Krakhuna and Otskhanuri Sapere. She produced 7,500 bottles in 2018, which most of them are currently exported. As the demand for Baia's wines continues to grow internationally, the question is if she can continue to grow with her winery to this extent herself. She would like to increase her production to 10,000 bottles, as long as she can remain true to her roots...

More information about Baia Abuladze can be found on her own website: www.baiawine.com