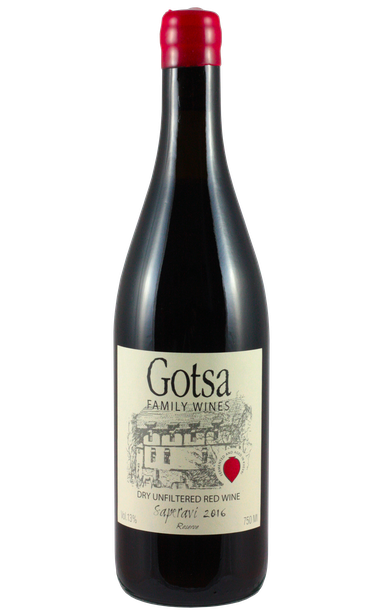 This Saperavi does not let you look at his cards right away. The nose arouses curiosity, aromas of wild berries and exotic herbs soar, while the body impresses with its lively tannin structure. Less heavy than the classic Saperavis from Kakheti, the taste is pleasantly balanced, fresh nuances of roasted nuts and ripe pomegranate can be tasted. Finally, in the finish you can feel the finesse, stability and craftsmanship that went into this wine, as it has matured for almost two years in Qvevri and then another half year in wooden barrels. As a 2016 vintage it has an enormous ageing potential for natural wines.

The story of Gotsa Family Wines begins in the early 20th century, when Konstantin, the grandfather of Beka Gotsadze, started making traditional wines in Western Georgia. While the location of the vineyard changed over time, the tradition of the family business remained. Not far from the capital Tbilisi, Beka and his family now run the winery much more professionally in the village of Kiketi, idyllically situated at an altitude of 1300 metres in the immediate vicinity of the Algeti National Park. The vineyard is located about 10 kilometres away in the much deeper Asureti Valley at 550 metres. The difference in altitude ensures a correspondingly cooler climate in the Marani (wine cellar), which allows a more precisely controllable fermentation and maturation.

Gotsa's wines are produced using the traditional Qvevri method and the vineyard is cultivated biodynamically. How seriously he takes this sustainable approach is shown by the Demeter certification, which was recently successfully completed for his 2018 Rkatsiteli-Mtsvane. Thus, Beka is the first Georgian winegrower to have this biodynamic certification.

He is in every aspect a busy man, who in his first life was actually an architect. Now in his second life he is mainly a winegrower and realizes new ideas. He is constantly expanding the variety of grapes he cultivates and is proud to currently cultivate 14 different grape varieties. But this is just the beginning, Beka is now brewing a Grape-Ale Craft-Beer (with wild grape yeast) and you can also taste apple cider at his place.

More information about Beka Gotsadze can be found directly on his own website: www.gotsawines.com