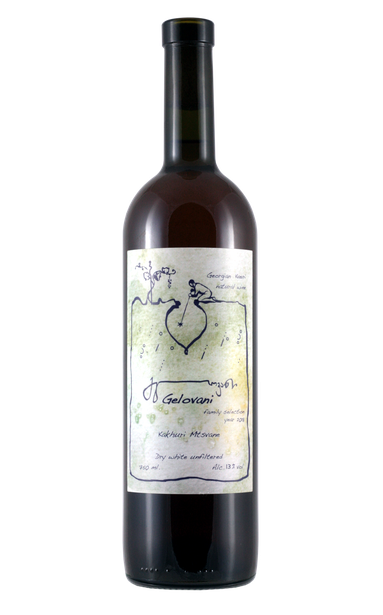 The Wishing Table
Gelovanis Mtvsane is a perfect composition of freshness with a deep foundation. Dynamic fruit notes of yellow mirabelle, quince jelly and dried orange peel meet discreet accents of cedarwood and apple blossom. Well breathed, place this wine on a table and drink it with good friends. It seems as if the bottle becomes never empty, so individual, full-bodied and long every sip tastes.

Akaki Gelovani's story is a fantastic combination of destiny and coincidence that made him become a winemaker. Growing up in Tbilisi, he studied law and initially worked for a few years in his profession.

In 2006, out of sheer pleasure in his hobby, he began to take a closer look at grapes and wine, and finally asked his father to drive the car out of the garage, the space being needed for wine production.

The whole family, friends and acquaintances gathered in the large courtyard in front of the garage, and together they pressed the grapes and produced young wine, which got better every year, singing and enjoying themselves...

And then a memorable gathering of Georgian singers of traditional, polyphonic music guided the further destiny: Akaki met the monk father Gabriel, both winemakers, both courageous singers, but an interesting age difference of exactly 18 years between them.

A lasting relationship of mutual teaching/learning, questioning and deep inspiration developed, which led to Akaki finally being willing to cultivate his own vineyard. He bought almost 5 hectares in Ozhio (Kakheti) where he cultivates Mtsvane, Rkatsiteli and Saperavi (in the early years Akaki bought his grapes from farmers in Kakheti, whose methods he trusted). To this day, Father Gabriel has remained a faithful and close mentor to him.

And in 2017, he was finally ready to turn his passion into a vocation: for the first time, he professionally bottled his wines with a beautiful label and presented wines and himself to public opinion. We are especially pleased that we immediately recognized the potential of his wines and were the very first to export his 2017 vintage from Georgia.

His philosophy is simple and pure: We do not disturb nature, we do not use chemicals in the vineyard, the wines are traditionally born, shaped and matured in Qvevri.

I was allowed to take part in his grape harvest in autumn 2020 and witnessed the animation that was inherent in the whole day. From the physically hard work of pressing the grapes, the songs that were always sung in several voices, to the most delicious feast in the large family circle, the rtvelis supra, a truly genuine harvest festival.