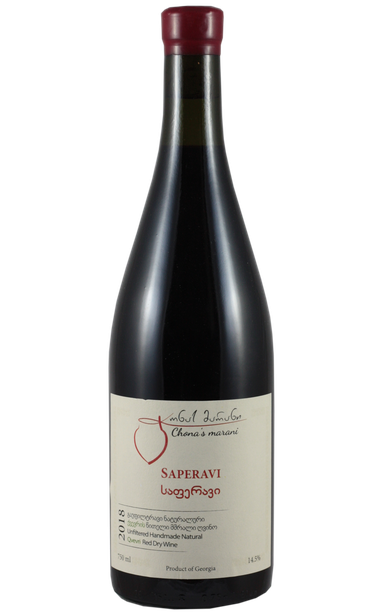 When thinking of Iberia, the Spanish peninsula normally comes first to your mind. But also, in the Eastern Caucasus there was once the kingdom of Iberia. Accordingly, the origin of this Saperavis could have been located in Rioja. Like an excellent Tempranillo, this wine is dominant at first, accompanied by structured tannins, balanced acidity and a harmonious finish. The fruity note is a soft and powerful blend of fresh meadow herbs and ripe red berries.

We meet Mikheil on a sultry summer afternoon in his house in the middle of Telavi. Actually, it should only be a short meeting, but that rarely works in Georgia. He shows us his newly installed Qvevris in the garden behind the house, tells us the story of his family. His old, introverted father stays in the background, but you can note his handwriting everywhere and his doings that are bearing fruit today. And so Mikheil is a young man in the late 30s, with an aura of calmness and inner serenity about him. While he shows us around, he smiles shyly to himself, his eyes radiate the highest attention. For him, viticulture is one way to express his nature, but not the only one: he is one of the six members of the famous men's choir Alilo, which is known all over Georgia for its polyphonic, sacred singing. His wine tastes like music, which resonates in the mouth for a long time. His family has a long tradition in the production of natural wines. In the third generation, they grow wine in a Kachetian way, because they feel committed to the traditional Qvevri method. But only under Mikheil has Chona's Marani established itself as a well-known brand nationwide. The vineyards with the total area of two hectares are located a few kilometers out of town in the village of Kurdgelauri, 550 above sea level. The soil consists of mineral clay and is extremely valuable as the vineyards are located in the protected region of Tsinandali. The vineyard is maintained according to organic biological rules. Currently, three different grape varieties are cultivated: Kachuri Mtsvane, Rkatsiteli, Saperavi.