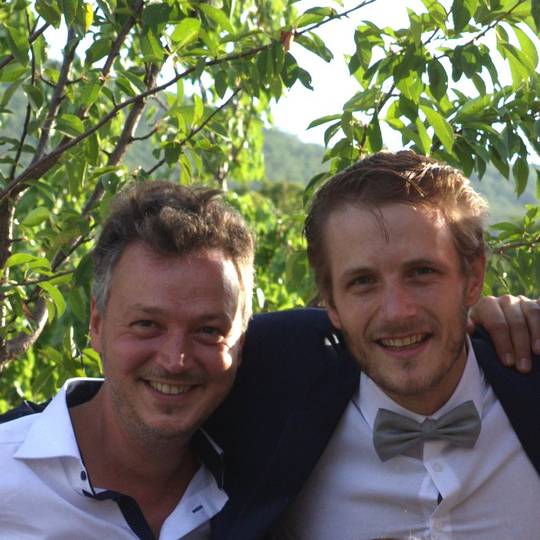 We are Zoltan and Raphael, two life artists based in Berlin, one musician, the other psychologist. One world connects us strongly: our love for Georgia - its people, its music, its landscapes and its culinary art. Through our wonderful Georgian wives, who are sisters, and numerous trips, we have been able to immerse ourselves in the country where the origin of the wine is found with all its hospitality and narrative stories.

But how did it all start? In the early 2000s, Soliko Tsaishvili made his passion for wine a calling and became a winemaker in Kakheti. For the desired 5.5 hectares of land, however, lacked the full funding, so he asked his longtime friend Gia Gokieli, our father in law, if he wanted to invest in the vineyard. What could be better than private investors who are not pushing for growth on a yield-hungry basis? So, since 2006, the Gokieli family owns a good hectare of land in the Kakhetian village of Kardenakhi, where the dividend is distributed every summer in liquid natural substances. In the following years, he became a recognized pioneer of the Georgian natural wine scene and founded with nine like-minded winegrowers the Natural Wine Association, consider their vineyard as a holistic, biodynamic system and cultivate accordingly.

In the spring of 2017, we asked ourselves if Solikos Chacha (Georgian pomace brandy) could not be imported to Berlin so that our friends and acquaintances could get to know this noble spirit. A real crazy idea that we eventually realized. And as one thing comes to another, from there the step to the wine was not far away: One year later, in March 2018, we imported our first three pallets of Georgian natural wines.

In the meantime, and some successful imports later, we now have 23 natural winegrowers from Georgia in our assortment, which enables us to present a very diverse and sophisticated taste spectrum to a curious target group.

Especially we are proud that already three Georgian restaurants have our wines and spirits on their menus: Restorani Tbilisi, Schwiliko and Der blaue Fuchs.

Unfortunately, Soliko had a serious case of cancer during that time and had to stop his own wine production, so we tried his recommendation of other natural growers until we got our first wine portfolio together. In the end he lost the heavy fight against the disease. That's why we do not want to give up now, but to preserve Soliko's legacy at least in the way that we want to present handcrafted natural wines from excellent winemakers to an audience who consciously enjoy and are interested in how a product is produced in its original way. With this approach, Soliko became the guiding principle of today's natural winemakers’ generation and it is our concern to show curious people new taste perspectives that can only be found in Qvevri wine ... 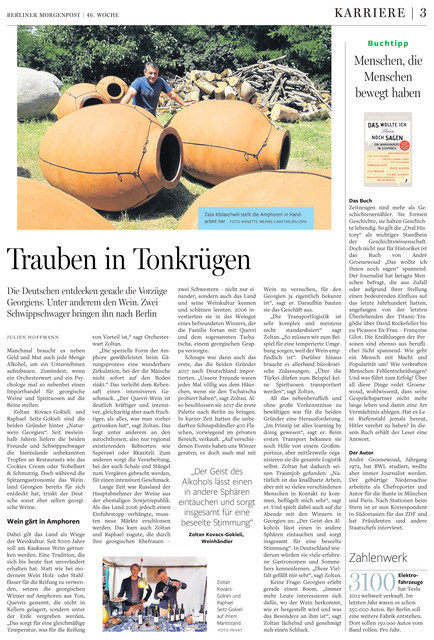